The Rochdale AFC information page from Football Fan Base

The Football Fan Base brings you the Rochdale Association Football Club results together with a fixture list above. However, should you wish to see the current league position for Rochdale, click here.

Rochdale AFC currently plays football in English League One. Staff at the Fanbase hope that the club and supporters do well in future seasons.

To begin with, Rochdale A.F.C. is an English football team from the Greater Manchester area.

Indeed, Rochdale came into existence in 1907 and currently play their home games at the Spotland Stadium. The team mainly plays its home games in a strip that is blue and white.

Rochdale’s stadium has a capacity of 10,249 and the atmosphere is very good when the supporters are on song. It is difficult for the club to fill the stadium but local derbies do attract more than hardcore fans.

Rochdale did win the Football League Cup in 1962, but apart from that, major honours are none. However, they have a few very minor cups in the trophy cabinet such as the Lancashire Cup that Rochdale has won three times.

Being in the Manchester area, Rochdale has many local professional football clubs close by. Some of the following football teams are obvious rivals:

Here at the Football Fan Base, we allow you to promote your favourite footy team. After all, that’s why our Fanbase exists!

Go ahead and reply to the football posts on the blog or even create your very own posts. You can also send us some information about Rochdale for this info page if you wish. Once we verify the information, we will adjust accordingly.

Of course, here at the Football Fan Base, we have the biggest fans forum on the internet. However, you can create your very own Rochdale website and forum too!

Due to the expansion of the Fanbase, we now include the Rochdale Fans Forum in our own message boards. So, use our platforms to promote Rochdale AF. If you don’t bother, then rival supporters will and go above your team!

Your football club is the best team in the world, right? Then go ahead and promote it! 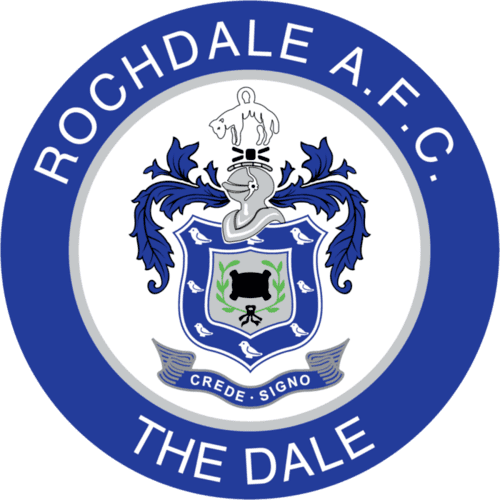